By Betty O. Parker Last updated Nov 27, 2021
Share
The commemorative plaque is mounted on a facade of the headquarters of the French newspaper in Marseille. (Photo: VNA)
Paris (VNA) – A commemorative plaque of President Ho Chi Minh was unveiled at Francein Marseille on November 26, as part of the activities marking the 110th anniversary of the embarkation of the late President on the Admiral Latouche Tréville for France, beginning his journey for national salvation.

The ceremony was co-organized by the Embassy of Vietnam in France, the authorities of the city of Marseille and representatives of the French Communist Party and the newspaper La Marseillaise.

The granite slab is mounted on a facade of the headquarters of the French newspaper in Marseille. 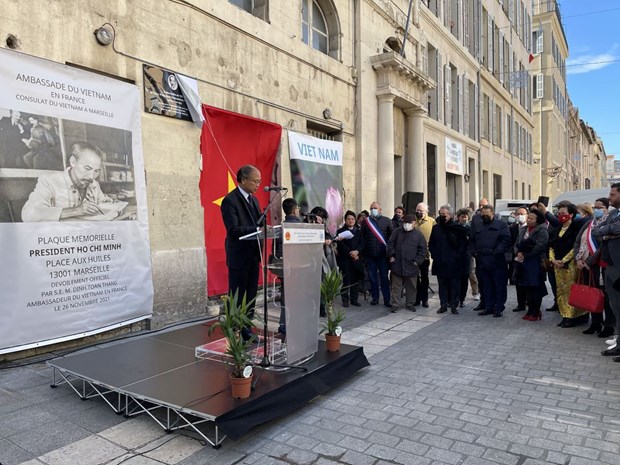 In his words, VietnamAmbassador to France Dinh Toan Thang thanked and highly appreciated the warm sentiments of the leaders and residents of Marseille, who consider the commemorative plaque as part of the city’s cultural heritage.

Thang said the event helps keep the memories of President Ho Chi Minh alive, while demonstrating the special relationship between Vietnam and Marseille.

The leaders of the French Communist Party and the newspaper expressed their respect for the beloved leader of the Vietnamese people.

Echoing Thang’s views, they said the plaque showed the feelings, friendship and solidarity of people in Marseilles and France in general with the Vietnamese people./.