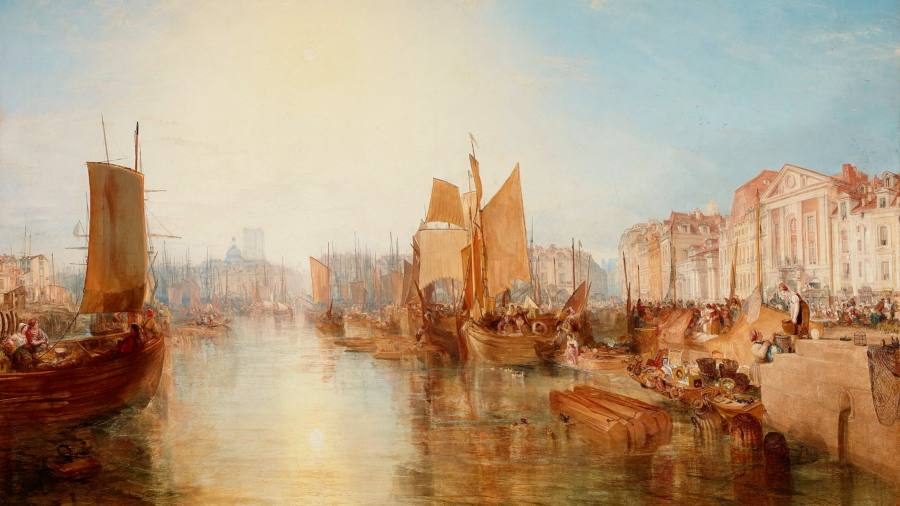 In his poem “Le Port”, Baudelaire rejoices in the “mysterious and aristocratic pleasure” of standing on a pier to contemplate the swaying of ships, the rushing clouds, the changing colors of the sea and above all “all these movements of men leaving and men returning.” It was a romantic vision of the European port as a restless and liminal place, merging the natural and the man-made, mixing cultures, signifying excitement, l openness and acceptance rather than the barriers and borders of today.

No artist has visually shaped ports as emblems of change and aspiration more dazzlingly and consistently than Turner. In 1799, aged 24, he burst into tears when he encountered Claude Lorrain’s “Sea Port with the Embarkation of the Queen of Sheba”, sobbing “I could never paint such a picture”. In 1815 he did. ‘Dido Building Carthage’, his first major port painting, imitated that of Claudius and, by the terms of his will, hangs alongside him in the National Gallery. In 1850 his final submission to the Royal Academy revisited the subject – Aeneas leaving Carthage in “The Departure of the Fleet”.

Between these dates, varying and refining his depictions, Turner made ports crucial expressions for how he thought about his time, the past, tradition versus modernity, the rise and fall of empires. At the heart of the development of these imaginative narratives are a pair of monumental paintings from 1825-1856, “Harbour of Dieppe: Change of Domicile” and “Cologne: The Arrival of a Packet Boat: Evening”, which have just landed at the National Gallery. .

Unheard of in Britain since Henry Clay Frick brought them to New York in 1914, they are virtuoso stunners: scintillating, powerful, captivating. The third of this year’s excellent exhibitions focused on rarely loaned masterpieces from American museums, Turner on tour follows Picasso Ingres: Face to Face and The blue boyand works particularly well as a dialogue with the Turners in the permanent collection.

Sharing the same large, large horizontal format, Frick’s paintings have always belonged together and are complementary. “Dieppe”, bathed in radiant sunshine in the afternoon, takes you to a lively fishing port, a cozy and protected space. “Cologne”, staged at dusk, with a palpable feeling of the end of the day on the water, is orchestrated around the sweeping of the shore and invites the viewer to survey the city from the outside.

In both images, the ebb and flow of arrivals and departures, and the portraits of dozens of figures – working women in Breton costume on the quay, bourgeois tourists in Empire dresses partying aboard a Rhine steamer – give a daily vivacity, enveloped in more melancholy daydreams. on the passage of time. And each shows the European influences that shaped Turner’s art: Dutch seascapes and everyday paintings, French and Italian classicism. The first determines here the subjects, the second the architectonic compositions.

‘Dieppe’ directly follows Claude’s ‘Seaport’: two diagonal wings of sails and buildings converge towards a lustrous centre, where the hazy circle of the sun warms the whole scene, quivering mirror-like in the pool of water. On the sides, the detail is very pretty: the Hôtel d’Anvers with its two-storey pilasters; graceful 18th century houses, of exaggerated height, border the Quai Henri IV; home slippery fishing boat; a noisy outdoor market; countless slender masts and flapping sails.

A ship, filled with books, wine, baskets, plates, pictures, is a perfectly delineated still life but floating on the water, waiting to be unloaded, the shelterless objects of the change of address are full of pathos. Nearby, drifting pieces of wood bear the painting’s subtitle and date, now barely legible, as if the waves had eroded them.

In “Cologne”, painted a year later, the elegiac vein deepens. The painting centers on the massive angular sails of two boats entering the city with bands of revelers floating. The vibrant presence of modern tourists contrasts with a ghostly shoreline: a few stray workers, a lone dog, ruins, Gothic towers dissolving into flattened silhouettes against a rose-gold sky.

Most disconcerting, in the foreground is an eerie, dark, slender shape, tentacles extending in and out of the shallows. This suggests a sea monster, although it actually represents discarded fishing gear. So Turner made the banal bizarre, irresistible, sinister.

“All the magic of craftsmanship at the expense of all the magic of nature” complained one of its detractors. In 1825 Turner was 50, famous and in a time of defiant transition. His experiments with watercolors and the rapid adoption of the bright new pigments of chrome yellow, chrome orange, and pale lemon chrome had brightened his palette. He had already given ordinary subjects a sense of the sublime through dramatic lighting – the fishermen cleaning and selling fish in the National Gallery’s ‘Sun Rising Through Vapor’, for example. But from the 1820s its high key color and transparent, luminous effects began to go beyond realistic description.

The intense golds and shimmering reflections of “Dieppe” and “Cologne” inaugurate this late manner, which will finally lead, in the 1840s, to a quasi-abstraction. These two paintings, however, hold a wonderful specificity in balance with the exaggerated tonality. Rich hues cast a nostalgic glow, evoking the milieu of an enduring French fishing community and an old-fashioned imperial city. They are time traveler tales, offering a romanticism of tradition that was dwindling in the rapid industrialization of Britain.

“In France, we live in the imagination of the past; in England everything is new and on an improved plan,” wrote essayist William Hazlitt. Visiting Dieppe in 1826, he thought, “life here shines or spins neatly around its supple axis”, the inhabitants “drink from the glasses of the sun” – as in Turner’s cheerful picture.

Cologne, founded by the Romans, then a flourishing free port in the Middle Ages, aroused darker memories: its castles, its towers, its Rhineland legends, belonged to an extinct medieval civilization. Undercurrents of mutability and loss would emerge here more emphatically in later port paintings – the tragic grandeur of ‘Regulus’ and ‘Ancient Italy, Ovid banished from Rome’. But for Turner’s contemporaries, the immediate resonance of “Cologne” was unavoidable: the recent fate of the German city, occupied by Napoleon’s France from 1794 to 1814, was a lesson in the instability of nations.

During this period, travel to Europe had been impossible. Not the slightest thrill of making these images for Turner was the new scope – the opening up of the continent after the end of the Napoleonic Wars in 1815, the possibilities of movement of people, ideas, things. The moving ship in ‘Dieppe’ and the tourists in ‘Cologne’ are metaphors for wider ideals of exchange and freedom, as Britain adapted to a new European political order. These lavish multi-layered paintings spoke of the historic moment of 1826, and they speak of ours a century later.